Error: Access Token is not valid or has expired. Feed will not update.

Posted at 21:05h in Japanese Gardens by Carla 0 Comments
0 Likes

“Even though I arrived late from the airport rushing to get to Holland park, Ian Fleming, the head gardener, was very kind and understanding and told me that, after having something to eat, (since was lunch hour by the time I arrived), Marc Sinclair, the gardener in charge of the Japanese garden would be guiding the walk with me during my visit.

It took us only a few minutes to cross the distance from the general offices to the limits of Kyoto Garden.

As we approached the garden, I realized that, although the wooden fence surrounding the garden was not a “Japanese like” fence, my eyes were immediately caught by 3 tall narrow vertical stones, set in a small green island displayed next to the gate’s fence. I noticed that both fence and gate were informal that led me think that actually this entry was not the main entrance of the garden. These three stones were upright and respectful, watchful as guardians, yet also seemed to be welcoming the garden visitors on this special journey.

At this time, Marc and I were still talking ”small talk” in order to place me in this moment, in this situation that seemed almost surreal, to be visiting the Kyoto Garden in his company…

As soon as we stepped in, passing those stone guardians, my mind followed my eyes up a gravel path. Up a hill into the woods… up high, and behind a “No Crossing” bamboo pole fence, there were two sets of stone arrangements. One was just a barely revealed from this particular view and the other arrangement was set farther up the hill, almost hidden among the woods, on a higher mound of soil, like a small island.

I stopped and commented, “those are some impressive stones!” – Marc smiled and I believe that was the point where “small talk” ended.

This part of the garden was opened at 24th of July 2012 and it’s called the “Fukushima Garden”. It’s a commemorative garden as gratitude from the Japanese People to British people on the support received after the terrible events of the Natural disaster on 11th March 2011.

From this point forward, Marc started to guide me through other gravel paths, further into the garden, explaining the arched bamboo fences – Namako-gaki 海 鼠垣、ナマコ垣 – marking the path (he had built them with the garden’s team of gardeners, the Japanese way, with black rope knots – Otoko Musu 男結び

Marc explained that they had learned these and other techniques like the yukitsuri and yukigakoi that were, at this time, displayed in the garden to add some seasonal interest to the garden itself.

Up that gravel path a couple of the Tobi-ishi 飛石 stones stopped us at the entrance of the garden… steeping them forces ones eyes to look down, to see carefully where to place ones feet… (also is a way of lowering down the head as a sign of respect before entering a sacred place) only to then look up and be stunned with the garden suddenly revealed!

A lovely pond and hill garden could be seen, almost completely… Naked maples and weeping cherry trees surrounded the pond. In between, a few pines stood upright, seeming to be guarding, amongst all the others, showing their bare crooked branches with an almost unexpected look of dignity within its fragile semblance.

Marc stood there and told me – “Some of the people say that visiting the garden at this time of the year is not a complete experience since, they say – it’s not so beautiful – and I say, these naked branches, showing all their knots, all their textures are beautiful!”

– I agreed, and a memory of a past conversation with a friend came to my mind, as, just a few days before, I had told this friend that Japanese gardens, in winter time, reveal an unexpected beauty of truth… a beauty that is somehow hidden all year long, yet this truth exists and is there although we can’t see this fragile semblance in our overwhelming need of filling our senses with the texture of cropped leaves and colorful flowers.

Our western education tells us to look for the outstanding and our eyes seem to have a proper mind on following colors or element’s of the garden… always looking for the “more” instead of the “less”… On that occasion I told him, “Please, don’t look at a wintered Japanese garden, looking only for what is missing! Look at the garden and be blessed of all the new things that are suddenly revealed!!”

The nature of these leafless woods are of an outstanding architecture and, with the sudden light breaking through this architecture, brightens the green of the moss and shrubs that show a somewhat hidden and subtle beauty… a beauty that, most of the time, we don’t give any credit to, always looking past them unless they display a firework of flowers…

-“There – “ Marc said, pointing to the right side of the path surrounding the pond – “… that big rounded stone represents Buddha and, in front, on the other side of the pond, is set a big rounded flat stone, which is placed there to meditate… it’s a meditation stone, (Haiseki 拝石), and it’s set there to pay tribute to the Buddha.”

Looking at the nearest pond plan, on the right side – he told me -“There is an upright stone, representing the crane and in the foreground on the left, a small island, showing a head and tail is a turtle island, displaying a small (crane) pine on it’s back”.

Breathing deeply I told him that it was a beautiful sight…and considering my inner self, I felt blessed and privileged to experience all of what was being revealed… as if this were a scroll being unfolded like a tale before my eyes… no more did I feel as a foreigner… and, looking back at that flat stone I saw that empty spot was my Haiseki, and that the garden had taken me inside the scroll to become a part of this tale being told through this natural beauty, through this particular garden’s view of paradise… …and I felt complete and… Happy…” 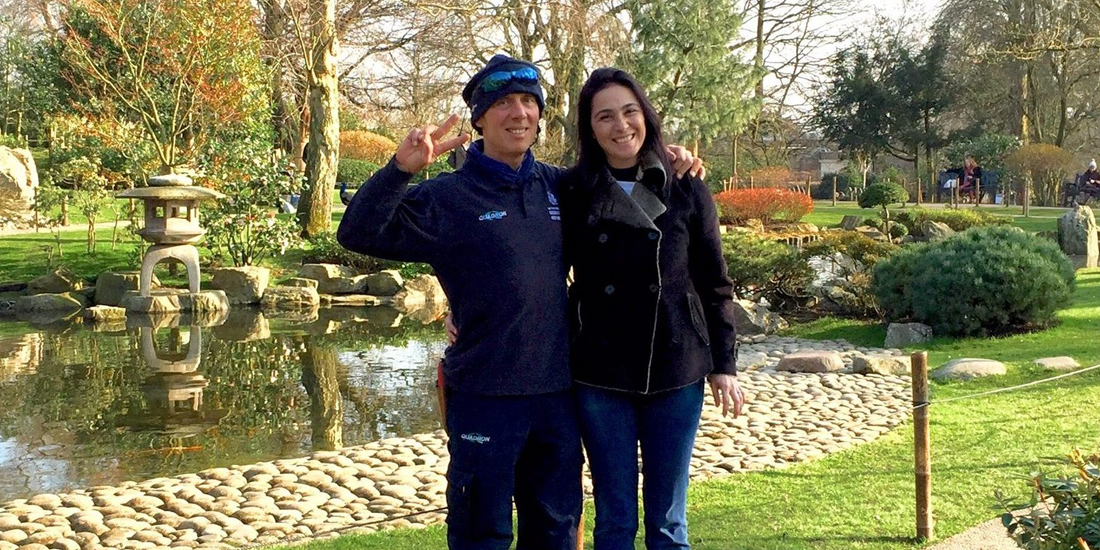